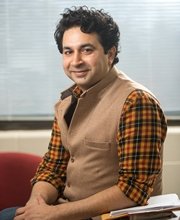 Aseem Hasnain is a political sociologist with interests in historical, comparative, and mixed methods research. He completed his PhD at the University of North Carolina, Chapel Hill, where he researched collective identity formation among Shia-Muslims in colonial and postcolonial India. His research and teaching interests include: Political Sociology; Race, Caste & Ethnicity; Globalization; Middle Eastern & South Asian societies. His published works include research on social movements among indigenous communities in India; comparative Human Rights with a focus on the US; and predictions in the Israeli-Palestinian conflict. He is currently working on several projects with other scholars studying the politics of vegetarianism and meat eating in modern India; discourse, rhetoric and collective identity formation; and the connections between race, caste, gender and capital. He grew up in Lucknow, India where he studied Physics, Math, and Finance before getting a postgraduate degree in community forestry from the Indian Institute of Forest Management, Bhopal. Before his PhD, he worked with NGOs and consulting groups in the Indian nonprofit sector.