Please join the Bridgewater State University Irish Studies Program and the Fordham University Institute of Irish Studies for Collaborative Writing in Irish Studies, a virtual panel discussion, on Wednesday, March 17, from 12-1:30 p.m. Joseph Valente and Margot Backus, authors of The Child Sex Scandal and Modern Irish Literature: Writing the Unspeakable, and Michael Rubenstein and Justin Neuman, authors of Modernism and Its Environments, will discuss the process of writing a monograph collaboratively and explore the theoretical ramifications of breaking down the single-author expectation of publication with Ellen Scheible of BSU and Keri Walsh of Fordham.

Joseph Valente is UB Distinguished Professor of English and Disability Studies at the University at Buffalo. Treasurer of the International Yeats Society and Vice President of the Northeastern Modern Language Association, he has authored more than 65 works, including Dracula’s Crypt: Bram Stoker, Irishness and the Question of Blood.

Margot Backus is Professor of English at the University of Houston. She is the author of Scandal Work: James Joyce, the New Journalism, and the Home Rule Newspaper Wars, and the prize-winning The Gothic Family Romance: Heterosexuality and Child Sacrifice in the Anglo-Irish Colonial Order.

Modernism and Its Environments argues that ecocritical and environmentalist approaches have fundamentally altered our understanding of both modernism and the field of modernist studies.

Michael Rubenstein is Associate Professor of English at SUNY Stony Brook. He is the author of Public Works: Infrastructure, Irish Modernism, and the Postcolonial, which received the Modernist Studies Association Prize for a Distinguished book and the American Conference for Irish Studies Robert Rhodes Prize for the Book on Literature.

Justin Neuman is Adjunct Professor of English at the Eugene Lang College of Liberal Arts, The New School. He is the author of Fictions Beyond Secularism, where he argues that contemporary novelists identified as antireligious have instead written some of the most rigorous inquiries into the legacies of the religious imagination.

The event is open to the BSU community and the public. For the Zoom meeting link, email Dr. Ellen Scheible: escheible@bridgew.edu 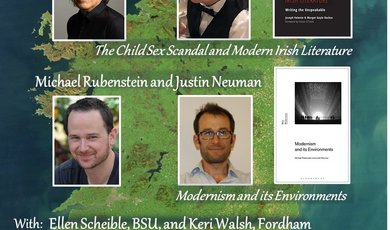