Explore the impact of Asian Americans on America’s past, present and future, with screenings and discussions of two episodes of the PBS documentary series ASIAN AMERICANS.

Told through individual lives and personal histories, the five-hour film series delivers “a bold, fresh perspective on a history that matters today, more than ever. As America becomes more diverse, and more divided, while facing unimaginable challenges, how do we move forward together? …The series casts a new lens on U.S. history and the ongoing role that Asian Americans have played in shaping the nation’s story.”

During the Cold War years, Asian Americans are simultaneously heralded as a Model Minority, and targeted as the perpetual foreigner. It is also a time of bold ambition, as Asian Americans aspire for the first time to national political office and a coming culture-quake simmers beneath the surface.

Following the screening, Dr. Bing Zheng, Assistant Professor of History, and Dr. Wing-kai To, Assistant Provost for Global Engagement, will lead a discussion of the episode.

At the turn of the new millennium, the national conversation turns to immigration, race, and economic disparity. As the U.S becomes more diverse, yet more divided, a new generation of Asian Americans tackle the question, how do we as a nation move forward together?

ASIAN AMERICANS is a production of WETA Washington, DC and the Center for Asian American Media (CAAM) for PBS, in association with the Independent Television Service (ITVS), Flash Cuts and Tajima-Peña Productions. The screenings/discussions are open to the BSU community and the public. Sponsored by the Minnock Institute for Global Engagement, Division of Student Success and Diversity, Martin Richard Institute for Social Justice, and Asian Studies Program. 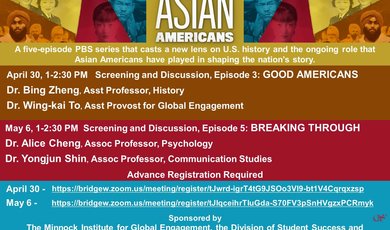