The Safe Return Task Force has released its Fall 2020 Safe Return Report. View the details and report below.

Framework For a Safe Return

Please select a topic below (pdf).

The following information has been compiled to assist with the safe return to campus.

FAQs for Students Resources for Employees 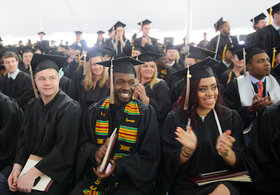 With the support of BSU’s generous donors and federal CARES Act assistance, BSU established a Student Emergency Fund. The Fund has already helped more than 1,500 students, disbursing approximately $1 million in aid to help students who had been impacted by the pandemic to pay their bills and other costs. For the 2020-2021 academic year, BSU has approximately $3.4 million available in the Student Emergency Fund to assist enrolled students, and also has invested an additional half million dollars in local financial aid.

For Students: Apply for Funds Donate to the Fund

In accordance with the recommendations and guidance of the Centers for Disease Control and Prevention (CDC) and the Massachusetts Department of Public Health (MDPH), the university has taken steps to limit the spread of COVID-19, but the health and safety of the community depends upon all its members accepting the shared risk associated with the disease.

Working together, we can help prevent the spread of COVID-19.

Responding to the COVID-19 global pandemic and its effects on the Bridgewater State University community, President Frederick W. Clark Jr., Esq. launched the Safe Return Task Force on May 5, 2020. Led by Provost Karim Ismaili, the Task Force was charged with planning and coordinating the safe return of students, faculty, librarians and staff to campus in fall 2020.

While the Safe Return Task Force met weekly from May 13 through June 18, its work was largely conducted by four subcommittees – Facilities and Logistics, Academic Continuity, Student Life and External Community Outreach. Two working groups were also developed to focus on BSUs health response and on the safe return of employees to campus. Their efforts were integral to the work of the Task Force.

At each of its meetings, the Task Force discussed developments in higher education across the nation and the most up-to-date guidance provided by the Commonwealth of Massachusetts. In addition to weekly Task Force meetings, Provost Ismaili met separately with the subcommittee chairs and working group coordinators each week for updates and to ensure appropriate information sharing.

More than a hundred individuals at the university were officially engaged in this work, with many others consulted along the way.

The Task Force also developed a survey that received more than 1,700 responses from students, staff, faculty and librarians, which helped to shape the implementation of campus planning. One major concern of note: balancing the need for safety without compromising BSU’s welcoming environment.

For the fall 2020 semester, as the remainder of this report will detail, Bridgewater State University will be delivering most of its classes online, while science labs, studio and performing arts, and selected seminar and capstone courses will blend online and in-person instruction. All residence halls will be open and the university will offer housing to all students who have made their residence hall deposit.

Six key planning assumptions guided the work of the Task Force, its subcommittees and working groups as members identified a number of issues and a series of plans to prepare the campus for the fall 2020 semester.

These planning assumptions focused the work of the Task Force and its subcommittees and working groups. The assumptions were shared with faculty and librarians on May 27 and with the larger campus community at the Town Hall meeting held on June 4.

Honest and candid discussions about how COVID-19 has impacted the campus community were shared among members of the Task Force, subcommittees and working groups, and those discussions reinforced that BSU is a caring community positioned to confidently rise to meet the challenge ahead. The Task Force specifically noted that the community must be sensitive to the following:

The Task Force remains confident that the campus has – and will continue – to work through these challenges with care and compassion.

In the course of the Task Force’s discussions and subcommittee work, a set of guiding principles emerged to inform the work of the university as it reopens during the summer with an eye toward the start of the fall 2020 semester.

The beginning of much of this work was organized as early as late-February under the auspices of the original COVID-19 Planning and Response Team, which continues to meet frequently and will be fully reactivated to implement the recommendations of the Task Force now that its work is complete.

May 21: Update to Campus Community

May 28: Update to Campus Community

Please direct all general questions related to COVID-19 to: