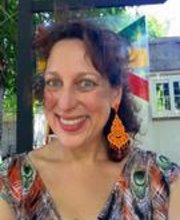 Dr. Fox is a cultural and applied anthropologist, scholar-activist and documentary film producer. Her work focuses on the Anglophone Caribbean, particularly Jamaica and Trinidad and Tobago, where she researches issues of gender and sexual diversity, women’s social movement activism for ecological sustainability, women's human rights and transnational feminisms and activism. She serves on a number of boards and committees including the Sexualities Working Group of the Caribbean Studies Association (CSA), the international advisory board of the Fondes Amandes Community Reforestation Project (FACRP) in Trinidad and Tobago, and is the Founder and Editor of the open access, online Journal of International Women’s Studies. Because she is especially interested in forging collaborations with the communities she studies, her educational and activist films were produced to serve their goals, while educating the wider public. Earth, Water, Woman: Community and Sustainability in Trinidad and Tobago and Many Loves, One Heart: Stories of Courage and Resilience each tell stories of people striving against odds to protect their livelihoods, well-being, and identities. Many Loves focuses on the burgeoning LGBTQ movement in Jamaica by highlighting courageous members of the community and their allies. The film shows the movement’s struggles and achievements, particularly the hopefulness and resilience of its young activists, whose bravery and desire to live in the Jamaica they love challenges the dominant narrative that most LGBTQ Jamaicans are trying to leave their island. She is the recipient of four Fulbright awards and many other grants and has published a number of books and articles.