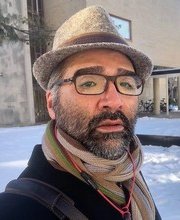 Dr. Navid Fozi is a cultural anthropologist whose research explores minorities, migration, and emergent forms of pluralism and nationalism in Iran and its diasporas. Fozi has conducted fieldwork with and published on ethnoreligious minorities in Iran. His book on the Zoroastrians, entitled Reclaiming the Faravahar: Zoroastrian Survival in Contemporary Tehran (Leiden University Press, 2014), and his article on the Ahl-e Haqq community, entitled “The Hallowed Summoning of Tradition” (Anthropological Quarterly, 2007) are part of a much larger body of work which brings scholarly attention to the place and experience of ethnic and religious minorities in Iran. Fozi has also conducted fieldwork with and published on the Iranian diaspora in Malaysia. His most recent article is entitled “A Fragmented and polarized Diaspora: The Making of an Iranian Pluralist Consciousness in Malaysia” (Diaspora, 2021). He has also published on contemporary Iranian politics. His articles, entitled “Governmentality and Crises of Representation, Knowledge and Power in the Islamic Republic of Iran” (Asian Politics & Policy 2015); and “‘Neo-Iranian Nationalism,’” (The Middle East Journal, 2016) were about the rise of a new work of nationalism and governance in contemporary Iran. Fozi’s current project is based on his 2015-2016 field research among Iranian asylum seekers in Turkey. This work was undertaken while he was a fellow of the Scientific and Technological Research Council of Turkey (TÜBİTAK) at the Middle East Technical University of Ankara. Tentatively entitled “Diasporic Counterpublics: Multiplicities, Challenges, and Trajectories of Iranian Asylum Seekers in Turkey,” this project explores issues that range from Islamic Shiʿi Jurisprudence, citizenship rights, border crossing, and right of asylum, to transit processes, international politics, and transnational practices.

Fozi has been awarded a Visiting Fellowship at Harvard Law School’s Islamic Studies Program (2017-2018), a Fulbright-US Scholarship based in the University of Malaya for fieldwork with the Iranian Diaspora in Kuala Lumpur (2014), a Postdoctoral Research Fellowship at the Middle East Institute of the National University of Singapore (2011-2014), and a Fulbright-Hays Doctoral Dissertation Research Abroad for fieldwork in Iran (2006-2007).