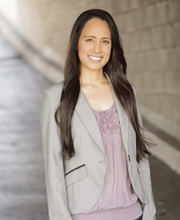 Christina Hodel is an award-winning American/French Polynesian filmmaker, screenwriter, film & television scholar, actress, and educator. She is currently an Assistant Professor in the Department of Communication Studies at Bridgewater State University where she teaches courses in both filmmaking and film studies. She works in both Boston, MA and Los Angeles, CA.

Christina holds a Ph.D. in Film and Media Studies from the University of Kansas, an M.A. in Individualized Study (Film/Dance) from New York University, and a B.A. in Film and Electronic Arts from California State University, Long Beach.

Christina’s current research explores issues of gender, identity, and girl power in contemporary “tween” television. She has been interviewed by Bustle and Voices of America.

She has published in Jump Cut, Girlhood Studies, In Media Res, the Alberta Journal of Educational Research, the Routledge Encyclopedia of Modernism, Studies in the Humanities, and the Historical Journal of Film, Radio and Television.