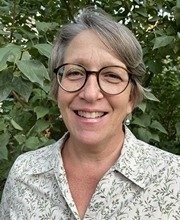 Research and Teaching Interests:
American Literature: Beginnings through the Nineteenth Century
Poetry and Prose of Timothy Dwight
Constructions of Authorship in Early America