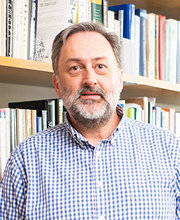 Dr. Thomas Kling is a theoretical physicist with interests in gravitational lensing, physics education, and student success in the STEM disciplines. Dr. Kling completed his undergraduate studies in physics with a minor in philosophy from Loyola University of New Orleans and received his MS and PhD in physics from the University of Pittsburgh, where he studied classical general relativity under Dr. Ezra (Ted) Newman. Dr. Kling's principal research studies how general relativity predicts light rays will be bent by gravity and the implications of this lensing for what we can learn about the universe. He has published 18 peer reviewed journal articles, including 6 with BSU undergraduate student co-authors. Two of his articles were designated as “Editor’s Choice” in General Relativity and Gravitation, most recently in 2019.

Dr. Kling has been principal investigator on $2.8 million in federal and state grants to support student success in STEM at Bridgewater State University. These include STREAMS, a 5-year, $1 million grant from the National Science Foundation (NSF) to transform student support and teaching within the College of Science and Mathematics and SEISMIC, a 5-year, $1 million NSF grant to provide scholarships and academic support to low-income, academically talent STEM students. He is currently co-PI on microCOSM, a $300,000 NSF research grant designed to examine the effectiveness of linked course learning communities. Dr. Kling regularly publishes research articles and presents at conferences related to his student success work, including five peer reviewed publications.

His work in promoting student success in science and math has led him to hold several appointments leading student success and faculty development initiatives. These include Faculty Associate in Academic Affairs for Student Success from 2013 to 2015, Faculty Fellow in the Office of Teaching and Learning from 2012-2013, and coordinator of First Year Seminars from 2007 to 2010. Dr. Kling served as Chair of the Steering Committee of the Massachusetts Project Kaleidoscope Regional Network since 2017, helping to coordinate eleven regional professional development conferences.

Dr. Kling has been at Bridgewater State University since 2003 and was promoted to full professor in 2012. Tom enjoys working with students on undergraduate research projects related to computational approaches to gravitational lensing. He regularly teaches introductory, calculus-based physics; first year seminars; and upper-level physics classes including computational methods in physics, mathematical methods in physics, classical mechanics, electricity and magnetism, and general relativity.