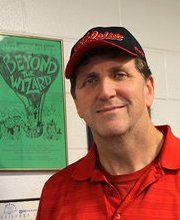 Jim Quinn has a BFA in Directing from Boston University’s School of Fine Arts and an MFA in Theatre Administration from Yale University. Additionally, he studied directing through internships at the Royal National Theater and The Royal Court theaters in London. Jim began his directing career in Boston where he directed at the Publick Theater, the Open Door Theater, and the Back Alley Theater. His production of Beckett’s Happy Days with actress Paula Plum won a Boston Phoenix Performance of the Year award. He was also the recipient of three Boston Theatre Critics Circle awards for Best Actor for his roles in A Midsummer Night’s Dream, Guys and Dolls, and The 5th of July. He is a past president of NETC, where he has served on the Board of Directors for over 25 years. He has written and directed over 20 plays and musicals here at BSU, and is the founder of Arts for Youth /Teens programs at BSU, as well as one of the founding Artists of President Clark’s Family Performing Arts Center.
Area of Expertise
Children's Theater, Theater Management, Musical Theater, Directing