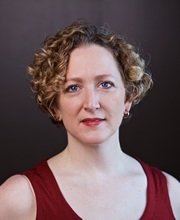 Professor Alix-Gaudreau teaches courses in Shakespeare, acting and oral interpretation. She has worked as an artistic director, intimacy director and producer in both theater and television. Recently, she has earned a second masters degree from the Shakespeare Institute in Stratford on Avon, UK, and co-wrote and performed in an original theater piece at the Royal Shakespeare Company. She has begun her PhD studies researching the impact of cross-gendered casting on theater audience perception in Shakespeare productions.