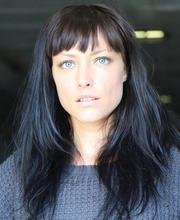 Costume Director
Rondileau Student Union, Room 037
508.531.2279
kmackilligan@bridgew.edu
Kellsy got her start in Costume Technology while working in the Costume Shop at the University of Southern Maine where she received a BA of Theatre arts. After graduating with honors, she moved to Los Angeles where she worked as a Costume Designer in theater, dance, film and television. Favorite productions include Peter Pan the Boy who Hated Mothers at Noah Wiley’s Blank Theater, and Dance in the USA with Media City Dance at the Ford Amphitheater. Kellsy also enjoyed her tenure with the Open Fist Theater Company, and dance companies Larkeldi Productions, and Porchside Productions. While Designing, Kellsy also managed the Costume Shop at A Noise Within Theater in Pasadena, and worked as a teaching assistant at Pasadena City College in their Intro to Theatrical Costume course. Kellsy has been BSU’s Costume Director in the Theater and Dance Departments since 2013. With a strong motivation to become more sustainable and inclusive Kellsy volunteers at BSUs permaculture garden, coordinates projects with Environmental Health courses, and seeks advice and wisdom from the students and Director of BSU’s Pride Center.