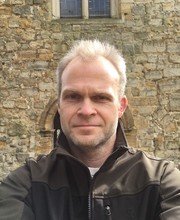 BA, Albright College
PhD, The University of Texas at Austin

Dr. Gregory Chaplin specializes in English Renaissance Literature, regularly teaching courses in Shakespeare, Milton, and Seventeenth-Century Poetry. Along with John Rumrich, he is the editor of Seventeenth-Century British Poetry: 1603-1660, a Norton Critical Edition. His essays have appeared in major journals such as ELH, Modern Philology, and PMLA. “Beyond Sacrifice: Milton and the Atonement” (PMLA 2010) was awarded the Milton Society of America’s James Holly Hanford award for Most Distinguished Essay on John Milton.

Dr. Chaplin is a member of the Northeast Milton Seminar and has served on the Executive Committee of the Milton Society of America. At Bridgewater, he served as the Graduate Coordinator for the English Department for nearly a decade. He received the BSU Lifetime Faculty Research Award in 2012 as well as the Presidential Fellowship Award for 2018-19.