Share
Through their professional and personal choices, professor and librarian seek to raise students’ awareness of the environment around them 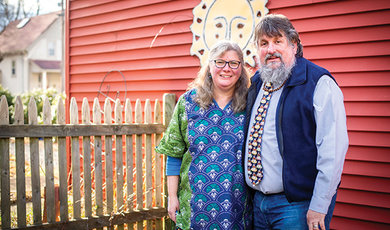 For James and Pamela Hayes-Bohanan, sustainability is something they live every day. In fact, their Maple Avenue home, which abuts the west side of campus behind the Harrington Hall parking lot, is itself a model of sustainability.

Not only does its proximity to campus mean the couple never needs to drive to work, the 0.31-acre yard is listed as a World Wildlife Fund-designated backyard habitat. Solar panels, a bat box and many other elements promote sustainability and reduce the family’s carbon footprint.

“I can stand in the yard and talk about this for an hour,” said Dr. James Hayes-Bohanan, a professor in the Department of Geography who’s been full time at Bridgewater State University since 1997. “The fact that it’s so close to campus gives me a chance to share it and show it to students.”

Pamela Hayes-Bohanan is a librarian and adjunct Spanish professor, who began her career at Bridgewater State on a part-time basis the same year her husband arrived, and became a full-time employee in 2002. Both have been committed to environmental causes for much of their 34 years of marriage. It manifests not only in their home, but also in the activities they pursue, in both their professional and personal lives.

“We are both passionate about it,” Ms. Hayes-Bohanan said. “It informs a lot of things we do.” Their home, she added, is “where our work and personal lives converge.”

The couple has been involved with BSU’s Sustainability Program since its founding, and regularly include in their lesson plans sustainability, environmentalism and social justice. Ms. Hayes-Bohanan taught the course “Sustainability 101” on two occasions. Even when teaching a Spanish class, she manages to work in these subjects that are near to her heart.

A longtime area of interest and scholarship for Dr. Hayes- Bohanan is coffee. His doctoral program focused in large part on Latin American studies. Two years after he arrived at BSU, someone introduced him to a coffee buyer from Equal Exchange, a global cooperative in West Bridgewater, and his interest on the topic of coffee grew.

“That changed everything, and I began to see coffee as something that was at the intersection of environmental and Latin American studies,” he said.

Of surprise to him was that coffee growers in Latin America get only one percent of what Americans pay for coffee. He’s working to bring awareness to this inequity and hopes to one day help change it. “Treating farmers and the land better means you get better coffee,” he said, not to mention it speaks to the idea of social sustainability.

For years, Dr. Hayes-Bohanan has taken study tours to Nicaragua to visit and work on coffee farms. For many of his students, it’s a highlight of their time at BSU.

Ms. Hayes-Bohanan has joined her husband on several of these trips.

Emblematic of her commitment to the environment is an apple tree outside the entrance of the library. Not wanting to see it neglected, as the apples were high in the branches, she decided she would make it easier for the campus community to enjoy its fruit. A professor friend had the idea to get an apple picker. Ms. Hayes-Bohanan made it happen. “Now there are two apple pickers in the library, and they’re in the catalog,” she said.

Her professional philosophy on sustainability as a veteran librarian is a holistic one. “All the work I do I see as a piece of the puzzle,” she said. “Libraries are the original resource-sharing place. You don’t have to buy more books and use more paper. We have it all here.”

The couple’s commitment has influenced many of the students they’ve taught over the years to be more
conscious of the environment and sustainability. A good number have followed in their footsteps (two are
featured in these pages). It’s proof that one of the most effective ways to teach is by good example.
“Something we say all the time,” Ms. Hayes-Bohanan said, “is everything is connected to everything else.”

Bridgewater Magazine keeps alumni, faculty, students and their families, staff, and friends of BSU informed about the university community and its impact on the region. This magazine is written, designed and edited by the Office of Creative Services and Publications with the needs of its varied audiences at heart and in mind.

For correspondence regarding Bridgewater Magazine, address all mail to: