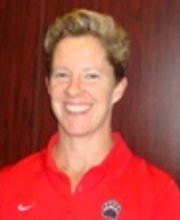 Dr. Robinson worked at the Brigham and Women's Hospital in Boston as a Clinical Cardiac Exercise Physiologist and taught classes at Eastern Nazarene College, Springfield College and Quincy College before returning to Bridgewater State University in September 2000. Dr. Robinson was named in Who's Who Among America's Teachers, 2000. She is recognized by the NSCA as a Coach Practitioner, Education Recognition Program Director, and was awarded the 2007 NSCA Educator of the Year. In 2007-2008 she was honored with the Presidential Fellowship Award at Bridgewater. Dr. Robinson is the head coach of Bridgewater's Weightlifting Team and is a competitive weightlifter herself. She has won gold medals at the Masters Pan American Games (2006 & 2007), holds the American and New England records in Olympic Weightlifting in her age and two body weight categories, and recently won The 2007 World Masters Weightlifting Championships in Hungary. Dr. Robinson is the program coordinator for the Masters Degree concentration in Strength and Conditioning. She is very actively involved with research and is currently working on the quantification of power in the Olympic lifts.